Login
Be sure to check our FAQ for answers to common questions!
Skip to Content

Lvl 1 : Try a couple of our Level 1 model kits. No tools are required. These "touch gate" snap-fit models are perfect for starters.

Lvl 3 : To continue building more models, you can build a collection of tools to make the process smoother and easier.

Lvl 4 : Once the kit is built, you can make it look better with a variety of methods like panel lining, top coating, and applying decals! 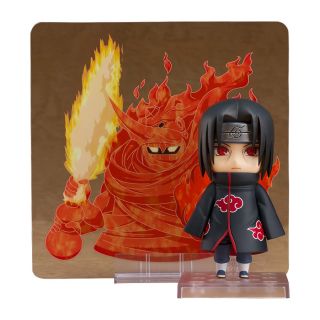 Nendoroid 820 Itachi Uchiha You have this? Share your review!
MY FAVE ONE!! ♡♡♡ - This is my fave Nendoroid so far! I love Itachi and GSC did a flawless job with his Nendo!! He comes with 3 face plates (standard face with his regular Sharingan, his Mangekyou Sharingan with his right eye bleeding and his smiling plate with both eyes closed). His accessories include the Akatsuki cloak (with 2 extra arms and 1 entire piece of his boths hands making a seal) and his Amaterasu. He also comes with a spare arm (to pose him poking Sasuke's forehead) and a clear sheet with an illustration of his Susanoo. His ponytail is movable and can be removed if you want. I love this figure because of the details like the Akatsuki ring on his right hand (in all spare arms), how you have to put the cloak over his regular clothes to pose and display him and how they carefully painted his expressions with his facial marks. The only thing I got disappointed was the box's size because is much smaller and not as fancy if compared to Naruto's, Sasuke's and Kakashi's boxes... (Itachi's, Sakura's and the Naruto Chinese Edition's boxes are smaller and not as detailed as the first 3 Nendoroids they released, I have no idea why. Maybe GSC is trying to make cheaper boxes?) Anyway, if you don't mind or don't display your Nendoroids in boxes, you won't get disappointed. Itachi Nendoroid is really an awesome figure and my fave character!!! :)))
Popular Now