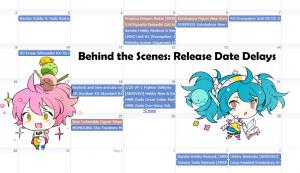 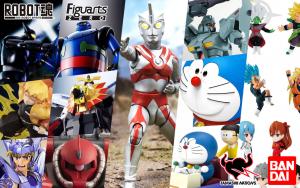 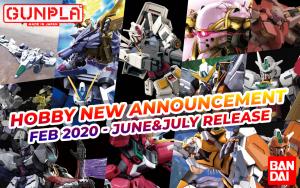 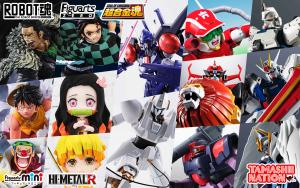 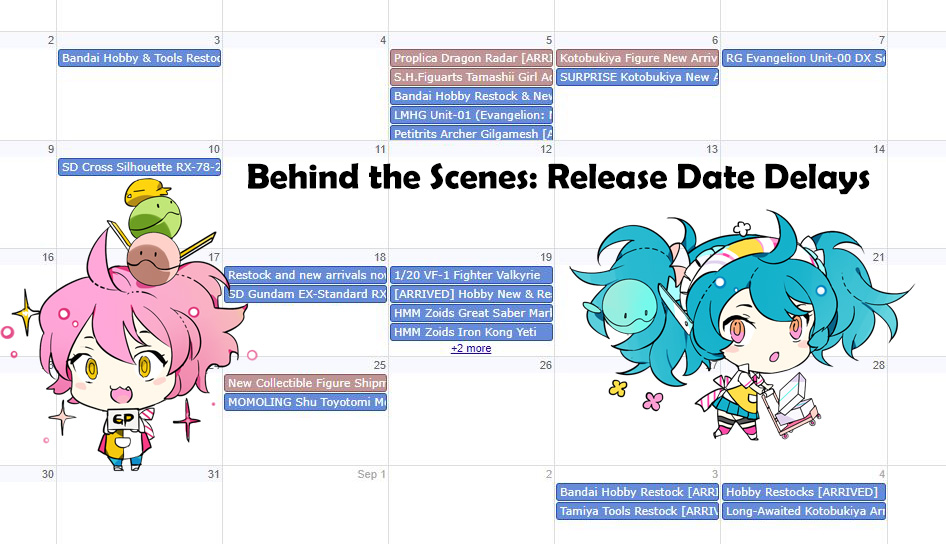 Welcome to our new series of Behind the Scenes blog posts, where we take a more in-depth look at common occurrences at Gundam Planet that may seem random from the outside. Think of it as an FAQ but with editorial asides and less professional verbiage! In our first entry, we're going to be talking about something that plagues every Japanese hobby/collectible business on planet earth: the dreaded RELEASE DATE CHANGE.

In order to get into what makes this happen so often in the North American market in particular, we need to first explain exactly how product information reaches retailers. You know how at some Japanese hobby shows you see those shadowy silhouettes of new Gundam models that say some asinine phrase like "Launching next....."? You—a customer—rightfully assume that we—a licensed retailer operating in direct conjunction with distributors owned by the company manufacturing the products in question—know what that shadowy silhouette is and are ready to take preorders immediately, knowing exactly what month it will be out.

We find out exactly as much information as you find out, at the same time as you. That's right. A couple weeks ago we posted a reaction to the RG Zeong announcement, and one of our followers replied "don't act like you guys didn't know." Buddy! We didn't know!!! I only just found out the Japanese release month mere minutes before writing this post.

We understand this seems like an insane practice, and that's because it is. So anyway, that's step 1 in the march toward a release date's inevitable delay.

Now that we know the Japanese release month and yen price, we patiently wait until Big Main North American Distributor sends us a solicitation, essentially confirming that yes, the North American market will receive this item. (Sometimes that just never happens, but that's an issue for another post.) In that solicitation, there will be a projected North American market release month, and that is ALL the information we have. For example, our initial solicitation said HGBD:R Gundam Anima[RIZE] would be an August 2020 release. Keep in mind we don’t have an exact date, it’s just within the month of August so we put August 31st to be safe. Cool! So we activate a listing and take preorders with the information we are provided and hope for the best. Then we wait!

Another very aggravating aspect of the entire Japanese hobby market is that they do not provide Japan street dates for products until the first day of their release month AT THE EARLIEST. So this means I charge into the office on the first of every month, open up the release schedule for EVERY manufacturer that we carry, and start frantically checking what dates need to be changed. Sometimes I feel pretty good about what I find: the Entry Grade RX-78-2 comes out in Japan on September 4th, and we were told October. Awesome! No change necessary!

Unfortunately that happens a MINUSCULE fraction of the time. Let's refer back to my Gundam Anima[RIZE] example, which we were told an August release for. Turns out that kit doesn't come out IN JAPAN until August 29th, so that gives exactly 48 non-business hours for:


in order to meet the original estimate we were given, which was August 31st.

Not happening. That process will generally take 5-6 weeks, sometimes more if the item is in super high demand.

So then we update the listings. You may notice we've started putting the Japan street date to clarify exactly what's going on with items. If you live in this US, there is no way you will get your item on the Japan street date unless you can use Instant Transmission in which case please come work for us. I hope this provides a window into the workings of this market, because I know how absurdly opaque it is. I know how frustrating it is to have no information, because not only have I been a customer with no information, but I've become the person who has to provide customers information where there is very little!

My favorite monthly ritual (which has happened about 100 times since I've worked here) is sitting down on the first day of the month, opening Customer Service emails, and answering at least 5 emails in the vein of, "The kit I preordered said (the previous month) and it is now (the current month), please provide a tracking number for my order at your earliest convenience."

Let me just tell you I would love nothing more than to magically have every item at the exact time we were told to expect it. What a world that would be! I also want to give you my personal 100% guarantee on my honor that Gundam Planet would never intentionally delay your preorder or anyone else's. It may seem hard to believe, but it actually makes more work for us to not receive and ship items on time. I hate delaying release dates more than anything!! You do not want to see the spreadsheets I use to track this stuff.

It's important to note this entire million-word blog post to this point is only discussing products whose Japanese dates are NOT delayed. That's right, this entire sequence of aggravating delays is 100% routine and EVERY normal release item is subjected to the possibility. If you want to get into model kits and figures that are manufactured in China or hand-painted, forget it. We still haven't received some figure preorders that were placed over two calendar years ago because they just keep getting pushed back for no discernible reason. If you get an email from us stating that your preorder's release date has changed, we promise that WE did not make the executive decision to push it back and are only reacting to impulses from external forces far beyond our control and comprehension.

We haven’t even mentioned that all of this, all these processes, have been exacerbated, complicated, and punched in the face repeatedly because of the pandemic. Not only were we short staffed for a time but so has everyone else on every level, from the manufacturer to the distributor and the shipping companies. All that compounded with normal non-pandemic related shenanigans further delay your items.

The important takeaway from all this is an exercise in understanding and patience. We know it’s hard, trust us. We’re eagerly waiting to build the same kits you are. We’ll get through it but we only can if we do it together.